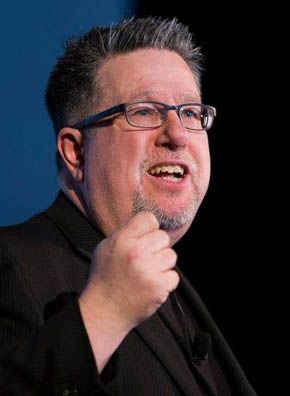 Bob and Andrew chat with Steve again this time about the effects of technology on productivity.

We talk about Steve’s speaking gigs. He loves to do public speaking and is a performer at heart. His passion is to stand in front of an audience and speak at conferences.

Steve doesn’t love technology but he is passionate about how technology affects us.

The Baby Boomers have to deal rapid change as society adopts social media and technology.

Steve talks about the new buzz words today… digital immigrant and digital native. Steve says that people aren’t digital immigrants if they didn’t volunteer or buy in. We are digital refugees.

Steve says the internet is a place, not a thing. It is part of society and if you ignore it you will be left behind.

Bob says that if you don’t know how to use email or social media you are illiterate. Even though they can read and write.

Steve says relationships can happen in any medium. How can you define what is real? Digital communications is another medium and it is just as real as any other. Social Media goes right down to the essence of being human. People crave connection to others and to communicate. 99% of all conversation is mundane and the same percentage of profound content is in digital as is not.

Steve says that if you are going to curate news and information on social media, you should add context and analysis. Add some value to what your sharing.

Bob asks if Steve believes that Technology has improved our productivity?

Steve brings up the speed at which information doubles. The worlds information is doubling every couple years. The average person is writing volumes of information in the form of email, social media posts, etc.

The very platforms that we use in order to improve our productivity are making most of us less protective.

Steve brings up the example of how to use email to, cc and bcc fields. Most people were never taught how to properly use them.

Steve has been doing a series of workshops on productivity in Vancouver and is now putting together online courses and products that help people become more productive.

It takes 7 minutes to get into the productive zone when your working but it only takes a split second to get knocked out of the zone with a distraction. Steve talks about tools and techniques that people use to stay in the zone.

People are not able to multitask… it is equivalent to drinking two or three beers. When people are texting and driving it doesn’t work out well.

Andrew brings up the Getting Things Done concept of “Open Loops”.

Steve says that open loops are the reason we need to have a trusted system. We need to stop using our brains to keep track of all these open loops. Put them somewhere safe where you can trust that they will be taken care of. There are tools and technology that can help you with that.

Steve likes Boomerang which is gmail plugin that allows you to assign emails a date where they will resurface at the top.

Mailbox is a great iOS app and Dispatch is the latest one that has risen to the top of Steve’s productivity tool list. Steve likes dispatch because of its Snippet feature which allows you to use keyboard macros. Text expander or Phrase Express are great apps for your Mac or Windows PC.

Steve loves Evernote and says it is the evolution of our organizational metaphor. It is a tag based structure that is not tied to the cabinet and folder structure. Using logical tags combined with search you never lose anything.

Apple has introduced Finder based tags in Mac and it will make everything easier to organize without organizing anything.

Steve points out that it is impossible for anyone person to understand everything about technology. But everyone can know enough to be part of the conversation. We don’t want to have a digital divide where some are digitally literate and the rest are not relevant and left out.

Andrew asks Steve is he has any hardware recommendations for improving productivity.

Steve said a lot of the hardware products are a little too complicated for many people. The problem is that need to settle down and not upgrade and change hardware frequently. It takes time to get good at using a device and to constantly change it can lead to frustration.